The Return of Sweet Fanny Adams! 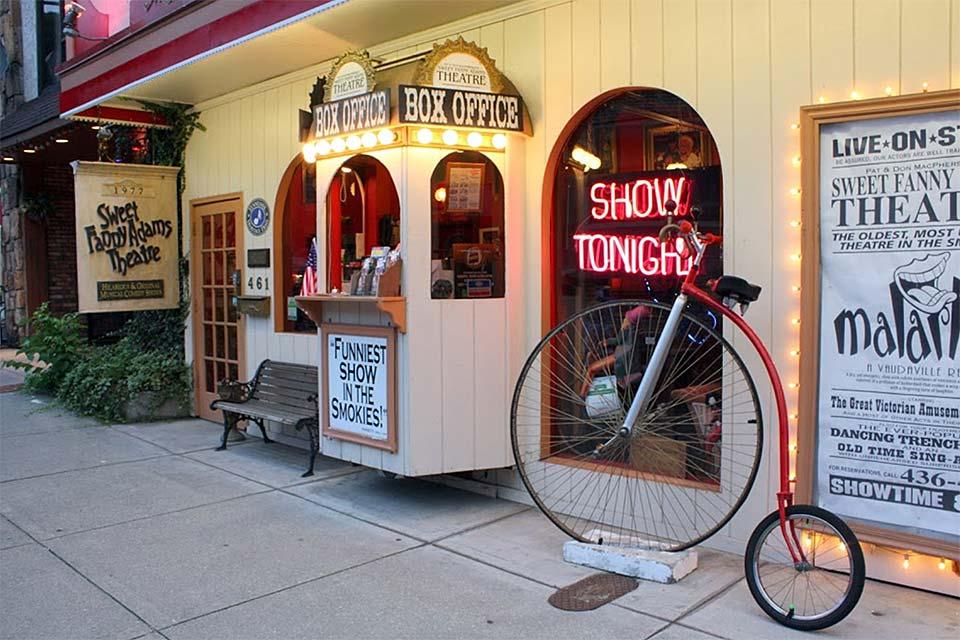 Some of you may read this and wonder, “Who is Sweet Fanny Adams?” For those of you in that category, we'll tell you it's the name of a theater in the heart of downtown Gatlinburg, and this unique venue will be beginning its 43rd season in the Smokies next weekend, on April 18.

That's right; Sweet Fanny Adams Theatre is the longest-running theater show in the Great Smoky Mountains, having opened its doors for the first time in 1977. Recognized as one of the most innovative and unusual professional theater companies in the country, SFAT was proclaimed a National Historical Treasure by the city of Gatlinburg.

The entertainment there is unlike anything you'll find in the Smokies. As Gatlinburg's only musical comedy entertainment attraction, the theater delivers two original comedy productions each season, and they never fail to leave audiences in stitches. The shows hearken back to the style of entertainment common to the old music halls of the 1890s, combining bawdy humor, clever wordplay, live music, improvisation and sight gags to create an evening of comedy mayhem. If you like Monty Python, you'll love Sweet Fanny Adams Theatre.

This year's shows are Vaudeville Extravaganza and Pandemonium, featuring All A Quiver. Vaudeville Extravaganza is a revue show consisting of songs, dances, sketch comedy, clowning and more. Pandemonium begins with a revue of vaudeville songs, sketches and comedy routines (including the cast's famous Paper Dance) and follows up with an old-fashioned audience sing-along (you don't want to find out what happens if you're caught not singing).

The theater is open five days most weeks, presenting the Vaudeville extravaganza three nights a week and Pandemonium on alternate nights. The venue only seats about 100 guests, but the intimacy of the experience is much of what adds to its charm. In fact, you'll be advised to “knock before entering” their restroom facilities. It's all part of the fun. And once you've seen a Sweet Fanny Adams show, chances are you'll be a repeat guest for life.

Sweet Fanny Adams Theatre was founded in 1977 by Don and Pat MacPherson after the couple relocated to the Smokies to raise their family. The couple had a showbiz background and decided to introduce Smoky Mountain tourists to their brand of entertainment. And it caught on. Sadly, Don passed away several years ago, and Pat has retired, but their grown children, Chris and Jennifer, have taken the baton and hilariously carry on their parents' legacy on stage nightly.

There's no onsite parking at Sweet Fanny Adams Theatre, but our selection of downtown lots provides parking in Gatlinburg that will put you within a very short walk of the venue.